Albeit is an exciting word that you can use to spice up your writing. It’s a more unique way to say “although” or “despite.”

This article will explain what albeit means, where it originates from, and how to use it in a sentence.

We use the word albeit to say “despite being.” 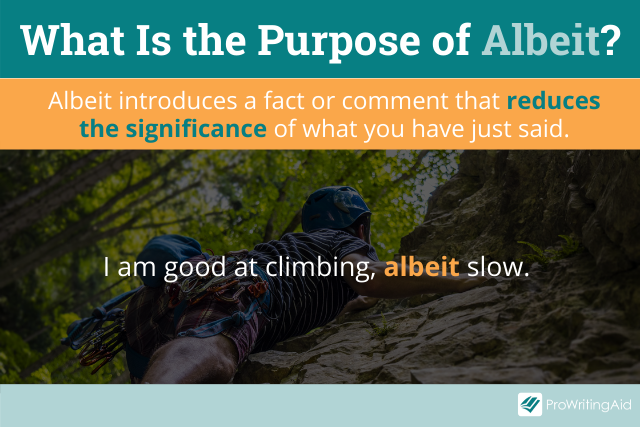 Albeit essentially means the same thing as “although.” However, it isn’t an exact synonym for “although” because these two words don’t play the same grammatical role in a sentence.

If you’re struggling to find a synonym for albeit that makes sense in the context of your sentence, you can use ProWritingAid’s contextual thesaurus check to find new word options. 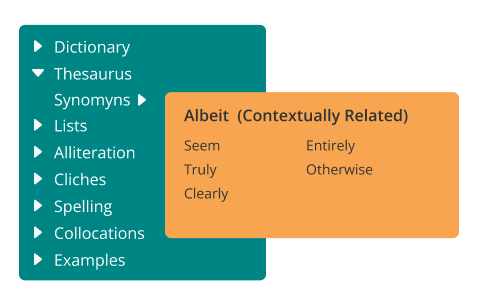 One helpful trick is to think of the word albeit as another way to say the phrase “although it is” or “although it does so.”

In sentences where the subject doesn’t match the pronoun “it,” you can swap the word “it” for whichever pronoun is relevant, and conjugate the verb “is” or “does so” accordingly.

Here are some other examples of how to use albeit in a sentence: 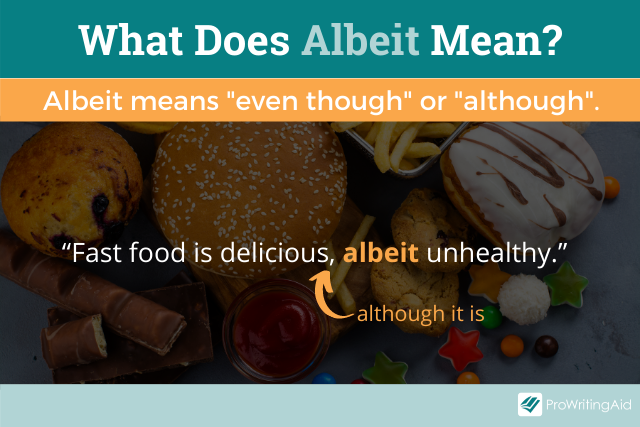 Unlike “although,” albeit can never be used to introduce an independent clause. You should never start a sentence with albeit.

It’s also useful to keep in mind that albeit It is a somewhat formal word, so you’re more likely to read it in a book or newspaper than to hear it spoken in everyday conversation.

Examples of Albeit in a Sentence

Let’s look at some examples of the word albeit in successful books.

“A true atheist thinks of the gods constantly, albeit in terms of denial.”—Feet of Clay by Terry Pratchett

“In linguistics class, we learned about people who had lost the ability to combine morphemes, after having their brains perforated by iron poles. Apparently there were several such people, who got iron poles stuck in their heads and lived to tell the tale—albeit without morphemes.”—The Idiot by Elif Batuman

“But he opposes to me—with a young man’s over-softness, albeit wise beyond his years—that it were wronging the very nature of woman to force her to lay open her heart’s secrets in such broad daylight, and in presence of so great a multitude.”—The Scarlet Letter by Nathaniel Hawthorne

“What do you call that moment when we let go of the conviction, albeit illusory, that life will only grow larger? That the horizon will always expand?”—The Luminous Heart of Jonah S by Gina B. Nahai

“Death was a natural phenomenon, albeit A sorrowful one for those left behind, but one that every man and woman must accept as the price we pay for life.”—This House Is Haunted by John Boyne 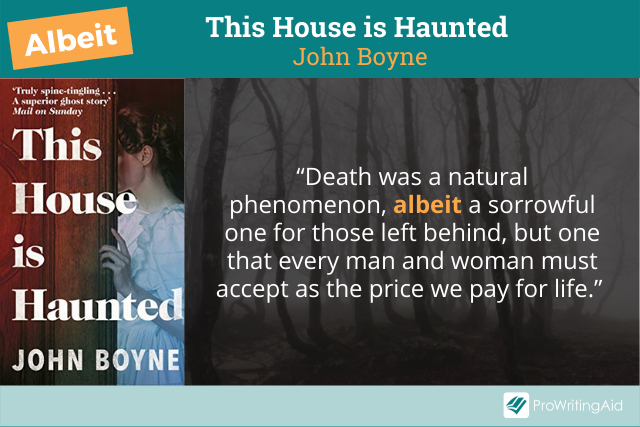 “All that time she spent fighting Tehl, making him the villain, blaming him, and yet wasn’t the monster of her story, he was the hero. He’d always been the hero, albeit an awkward one.”—Enemy’s Queen by Frost Kay

“Life is an honor, albeit anonymously delivered.”—In Search of Small Gods by Jim Harrison

The word albeit stems from Middle English in the 14th century.

Back then, it was a word that combined the adverb “all,” the verb “be,” and the pronoun “it,” and it was pronounced like all three words put together. It meant “completely though it be,” or “even though it is true that,” which is the meaning albeit still has today.

Editing can be difficult, albeit essential for crafting clear and effective writing. ProWritingAid is here to help!