The daily grind is an idiom that refers to your day-to-day routine. Despite sounding modern, it’s a much older phrase than you probably realize!

Let’s take a look at what the term daily grind means, where it comes from, and how to use it.

The “daily grind” means an everyday routine. It refers to something that occurs so frequently that it has become mundane and monotonous.

Usually, the term daily grind refers to a job, often boring, outside of the home. But it can refer to any daily work or routine. 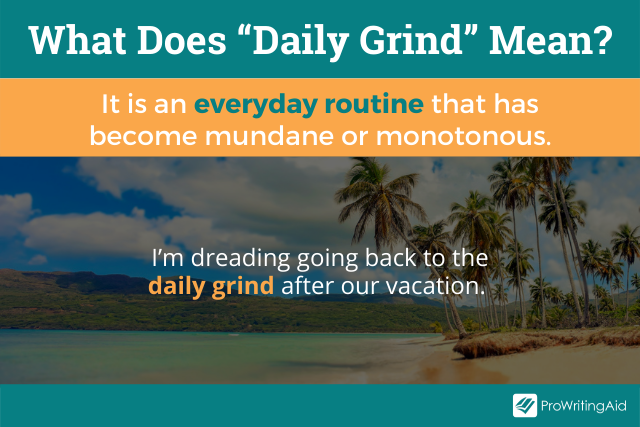 Synonyms for the daily grind include “nine to five” or just “the grind.”

You can use ProWritingAid’s Clichés Report to find boring and worn-out phrases in your writing.

Then you can come up with new ways to express the same ideas and freshen up your written communication.

People often use the term daily grind in a negative tone. It’s a way to talk about a daily routine or job that is not fulfilling.

It’s used to express boredom with a person’s day-to-day life. When someone uses this phrase, they are saying, “what I do every day is just a way to make money.”

If someone talks about the daily grind, they probably have a routine that is the same every day. They likely do not have an exciting career.

The daily grind doesn’t have to refer to a job outside of the home, however. It can refer to any repetitive task or boring routine.

For instance, many homemakers can experience the daily grind involved in keeping their families healthy and happy without a traditional paying job.

Here are some examples of how to use the phrase:

Origin of the Daily Grind

The daily grind might sound like a modern phrase, but it’s actually well over a century old!

This first phrase appeared in The Illustrated London News in the mid-1800s.

There’s an etymological folk tale about the phrase referring to flour-grinding mills, but that’s not actually true.

The word “grind” was used metaphorically for a few hundred years before the phrase “the daily grind” appeared.

The word “grind” has meant to subdue or metaphorically wear down someone since the 17th century.

By the 18th century, it specifically referred to wearing someone down with boredom or repetitive tasks.

Many jobs in the Industrial Revolution were very repetitive. Factory workers often did the same task over and over for twelve or more hours a day.

It makes sense that the phrase “daily grind” would become synonymous with the workday during the late 1700s to mid-1800s.

And the idiom is still common today. While most of us might not be cranking the same lever at a factory, we can all relate to the mundane parts of day-to-day life.

Examples of the Daily Grind in Sentences

Let’s take a look at some real-world examples of “the daily grind” used in sentences.

Here’s an irony about school: The daily grind of tests, homework, and pressures sometimes blunts rather than stimulates a thirst for knowledge.”—children’s author Jerry Spinelli

“I am of certain convinced that the greatest heroes are those who do their duty in the daily grind of domestic affairs whilst the world whirls as a maddening dreidel.”—nurse and social reformer Florence Nightingale 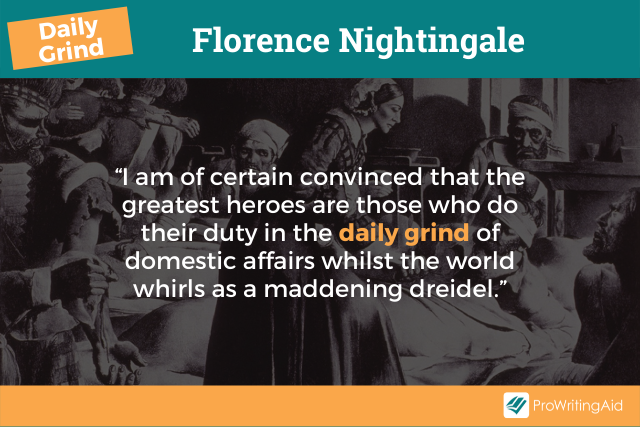 “Perhaps the ideal life is that of the week-end artist, who preserves the integrity of his own aesthetic ideals because of his economic independence… If his daily grind is hateful he has his weekly solace in art.”—painter Walter J. Phillips

From Florence Nightingale to modern American finance, the term daily grind remains a common idiom in the English language.