A story without conflict is not a story at all. There are seven main types of conflict in the novel, and most stories can fall into one or more of these categories.

One such conflict is known as Man versus Nature.

Man vs. Nature is a story the book returns to again and again.

Humans have been in conflict with nature since the dawn of humanity. Nature wins sometimes, humans win sometimes.

Because it’s grounded in a reality we all know, Man vs. Nature can provide endless possibilities for fairy tale ideas.

In fact, some of your favorite books and movies may display this discrepancy!

What is man versus nature?

The conflict between man and nature occurs when the protagonist, either alone or with other characters, is in direct opposition to the forces of nature.

There is some event or situation in the natural world that causes a problem. If more than one character is affected, your characters must work together to overcome the problem. 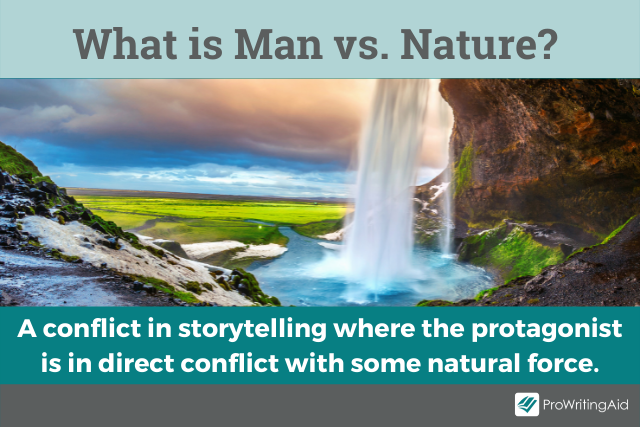 While the story will still contain enemies, the main conflict is with nature itself. This may happen in the form of a natural disaster such as a hurricane or snowstorm. Drought and famine are common in the literature.

There may be a supernatural force behind the conflict of nature, although the supernatural element is not the main player in the conflict. The conflict between man and nature can also be when the character encounters resistance from a certain element of nature in achieving his goals.

It is important to note that man versus nature does not refer to male characters only. In this sense, the term “man” refers to the human race.

Modern scholars and writers often refer to the conflict as person versus nature or character versus nature. We will use these interchangeably in this article.

Is man versus nature a subject?

You may hear people refer to the theme of human versus nature. However, it is not a subject and more conflicting. 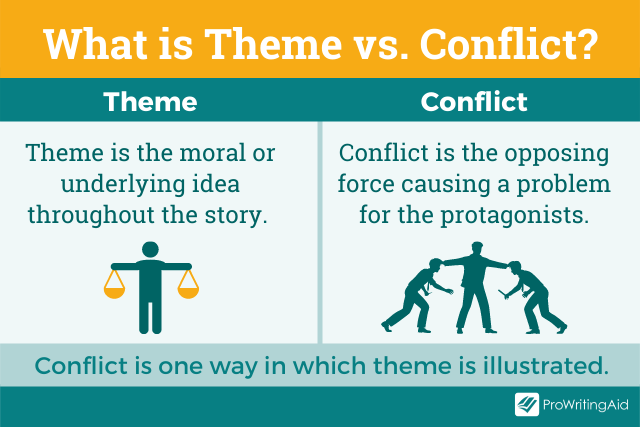 Conflict drives the overall story and drives the characters into action. The theme, on the other hand, is the general meaning of the story. The theme is conveyed through various elements such as characters, settings, and conflict. 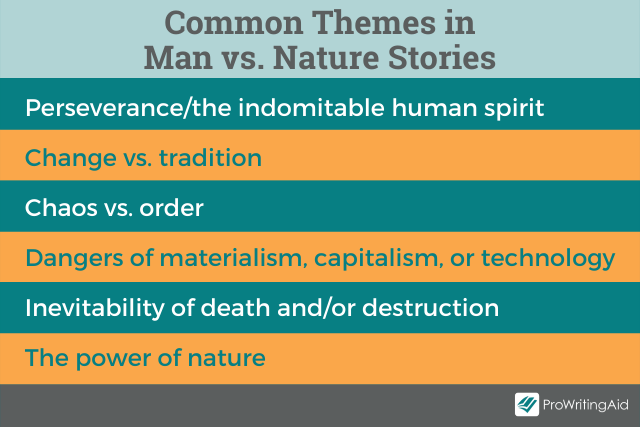 This is by no means an exhaustive list of themes that may arise in the conflict between character and nature.

The theme works with conflict, and the conflict between man and nature highlights the theme. Together, these provide a message to the reader.

What are the main types of conflict in literature?

Man versus nature is only one type of conflict. There are seven main types recognized by most writers and scholars. They are:

Each of these can be the primary conflict in a great story, regardless of medium or genre.

Why is man versus nature such a great external conflict?

Conflicts in the story can be internal or external. The conflict between character and nature is an example of external conflict. It’s a struggle in which the book comes back again and again. why? 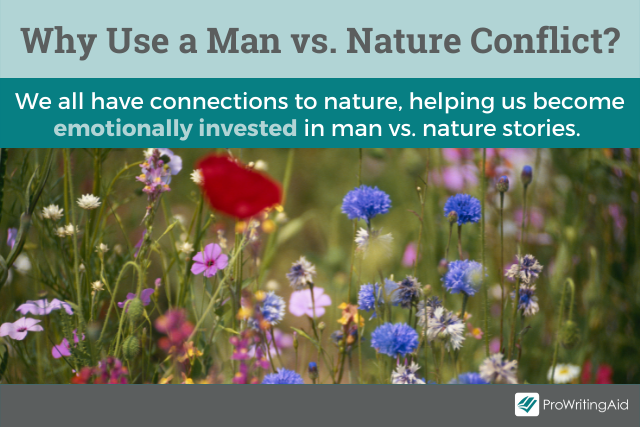 Man vs Nature is an excellent external struggle for a story for many reasons. First of all, there are countless ways nature can provide a problem for your characters.

If your characters are facing natural disasters, there are plenty to choose from.

Hurricanes, tornadoes, floods, tsunamis, snowstorms, avalanches, volcanic eruptions, dust storms and wildfires can be excellent motivators for your characters to do something.

Droughts and famines, whether natural disasters or the effects of a natural or man-made disaster, are also great fodder for stories.

The influences of humankind trying to control nature is another struggle that appears in real life and in stories – over farming, deforestation, resource depletion and pollution can provide many clues to the story.

When a character encounters resistance or struggles in parts of nature, such as surviving in new or hostile environments, the story can be a great way to explore the struggles and other inner themes further.

While some fairy tales may use a supernatural force as a catalyst for conflict, the general conflict must lie in a natural force.

Otherwise, the main conflict in the story will be person versus supernatural. 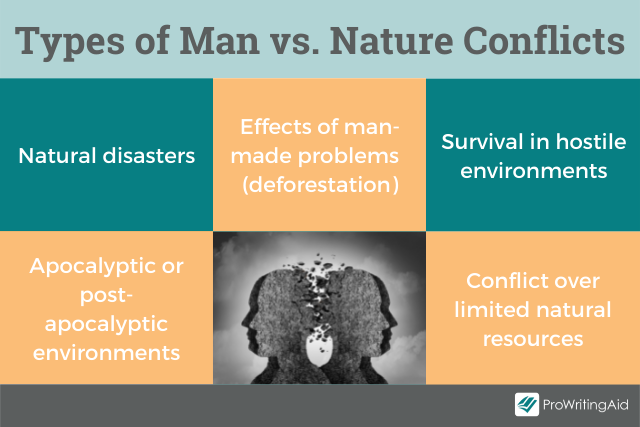 Why are there so many types of conflict in nature? Because humans are closely related to nature.

We all deal with the effects of natural forces, whether it’s climate change, the weather, disasters, or just our environment. It’s a familiar thing that’s been a part of our entire history.

We can apply the same familiarity to any story about nature. Characters don’t have to be human, and the world doesn’t have to be planet Earth.

I wasn’t trapped in a desert on an alien planet, but I did feel very dizzy due to the heat. I’ve never crossed the frozen tundra, but lost the heat during a blizzard in a place woefully unprepared for freezing weather.

Man vs Nature needs strong sensory details to draw readers into it. ProWritingAid Sensory Report can help you hit all the senses to make your natural struggles appealing and real. 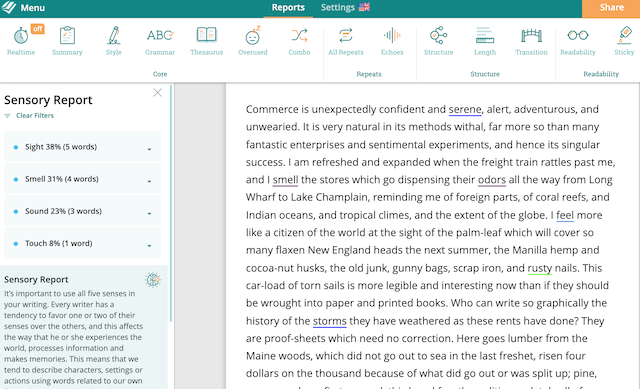 You’ll see how many logical words you’ve used of each type so you can create a balanced, well-rounded description. Try it for free.

Because of this familiar feeling of conflict with our environment, we can invest ourselves emotionally in conflicts that involve the natural world.

This is what makes writers write about the struggles of man versus nature and what makes readers read it.

What are some examples of human versus nature?

There are countless examples of the conflict between man and nature, from classic literature to obscure independent films. We have divided the following well-known examples into books and films. 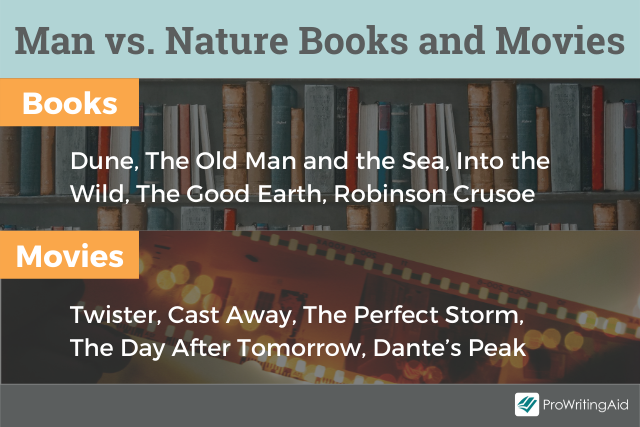 What are some good versus nature books?

It’s hard to pick just a few examples from books of great people versus nature books, but here are some great examples.

Dune Written by Frank Hebert is one of the bestselling science fiction novels of all time.

Although the story is full of political intrigue and social commentary, the core of the conflict is environmental.

Each planet’s environment shapes the features of its civilization, and water scarcity is a major plot point. The general message is that man and nature will always be at odds.

One will always destroy the other.

Margaret Atwood’s Miserable Trilogy (Oryx and CrickAnd year of the floodAnd MaddAddam) explores the conflict between humans and nature, especially when humans try to control nature.

The series takes place in a society where corporate greed and scientific technology have tried to control nature, leading to a biological disaster.

Throughout the series, Atwood explores the importance of humans reconnecting with nature and accepting that they are part of the natural world, not masters of it. 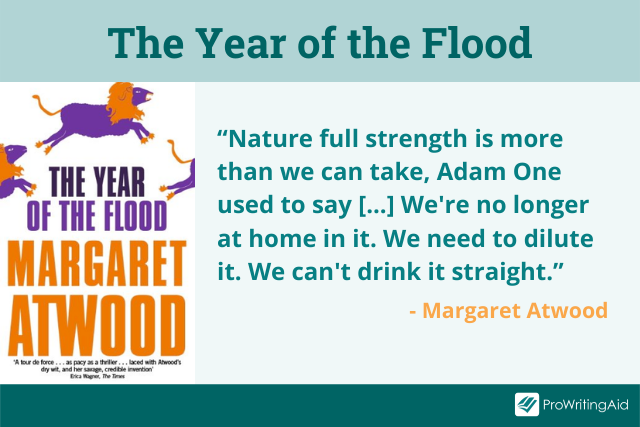 Award winning children’s book Julie from the wolvesWritten by Jean Craiged George, it explores the conflict between character and nature through an Inuit girl in the arctic tundra.

Through a series of tragic events, Jolie finds herself living with a pack of wolves to survive in the harsh environment.

The story explores the theme of modernity versus tradition and cultural evolution. Although written for children, this book is an influential read for all ages.

The old man and the sea Written by Ernest Hemingway is a perfect man versus a nature story.

Santiago, the protagonist, respects nature. It provided him with his livelihood, and he embodies various elements of the natural world.

But the conflict between man and nature takes place when he has to fight the sea and a giant fish to regain his lost position in society.

The theme that this struggle illustrates is struggle and perseverance.

These are just a few examples of Person vs. Nature in literature. Can you think of more?

What are the best man vs nature movies?

Movies are stories too, and the struggles of people versus nature are always popular in Hollywood. These are some excellent examples.

1996 movie Cyclone It is a fun example of person versus nature, especially natural disasters.

The story follows a group of storm chasers. Joe is determined to take readings from inside a hurricane.

As hurricanes grow stronger and more deadly, the film shows the dangers of a reckless pursuit of an impossible goal and the devastation it can leave behind.

The conflict between man and nature takes place when the main character Chuck survives a plane crash and must live on a deserted island.

Themes of human ingenuity and the will to survive are explored as he learns to survive on the island and later finds his way home.

It also explores the theme of nature as a tool for reconnecting with what is important in life. 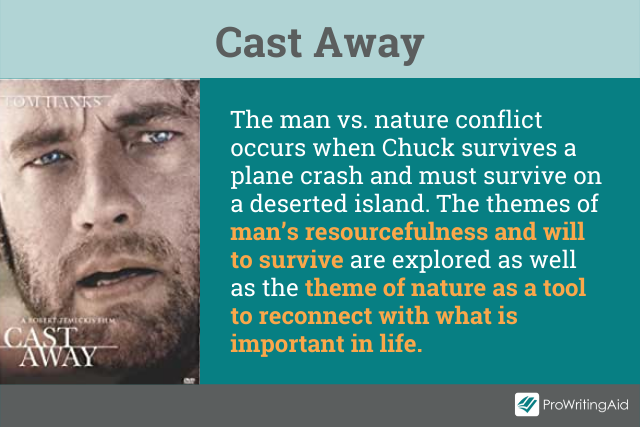 the day after tomorrow It is a movie about the end of the world released in 2004.

It’s an action movie that’s also a warning about the dangers of climate change, despite the Hollywood glow too.

The paleoclimatologist warns that climate change may cause a new ice age, but he ignores it. Then the ice age comes almost immediately with severe tragic storms.

The conflict between person and nature shows people trying to survive this sudden climatic shift.

It illustrates the consequences of human-caused climate change and the dangers of ignoring scientific warning signs.

We are sure you can consider many man vs nature movies, from perfect storm to Sharknado.

There is no shortage of story ideas for character versus nature struggles. It’s a great way to use familiar conflict to illustrate important and relevant topics.

What are your favorite man versus nature stories?

Are you ready to write your novel? Download this free book now:

Then you are ready to write your novel. excellent. But are you ready? The last thing you want when you sit down to write your first draft is to lose momentum.

This guide helps you work on your narrative arc, map out your main plot points, flesh out your characters, and start building your world.