Many people mix up the words humble and humility. So what’s the difference between them?

This article will explain the difference between humble and humility and help you remember when to use each.

Humble is an adjective defined as “not proud or arrogant.” Synonyms for humble include “modest,” “meek,” and “unassuming.”

You might describe someone as humble if they never boast about their accomplishments, or if they don’t think of themselves as being better than other people.

Here are some examples of how you might use humble in a sentence:

Humble can also refer to an inferior rank or background.

For example, you might say: “Jennifer never forgot the humble background her family came from,” meaning that her family started out in a lower socioeconomic standing than the one Jennifer is in now.

Humility is a noun defined as “freedom from pride or arrogance.” It’s a synonym for humblenessas it refers to the quality of being humble.

Having humility is seen as a good quality, since it means you don’t think too highly of yourself.

You might say someone has humility if they don’t overestimate their own skills, if they don’t brag about their accomplishments, or if they recognize and acknowledge their weaknesses.

Here are some examples of how you might use humility in a sentence:

What’s the difference between Humble and Humility?

Humility is the noun form of humbleand humble is the adjective form of humility. 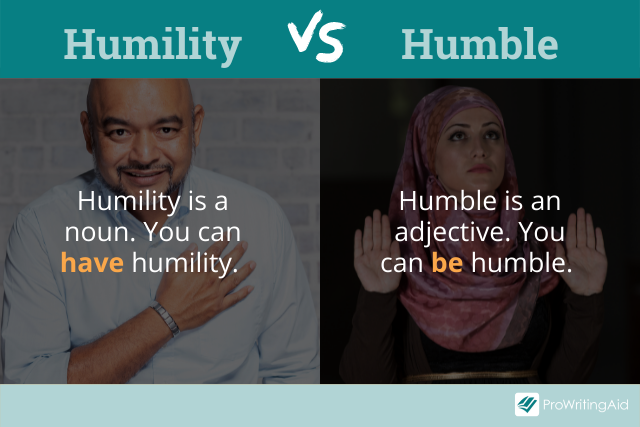 You can say a person is very humbleor that a person has a lot of humility. Both sentences mean similar things.

One useful trick for remembering the difference is to remember that many adjectives can be made into a noun by adding a suffix like -ity.

If you’re not sure which word you should be using, ProWritingAid will catch grammatical errors such as misusing humble and humility and help you use the right word instead.

Just remember that humility is a noun and humble is an adjective, and you’ll be able to use these words correctly in your writing!