Irony occurs when what happens is the opposite from what is expected.

Writers use irony as a literary technique to add humor, create tension, include uncertainty, or form the central plot of a story.

We will be looking at the four types of irony (three common and one uncommon) and providing examples and tips to help you identify and use them in your work.

Quick Reminder of What Irony Is

Irony is a rhetorical device in which the appearance of something is opposite to its reality.

There are four main types of irony: verbal irony, dramatic irony, situational irony, and Socratic irony. Socratic irony is not a literary device, and therefore we will not be looking at examples, but it is worth being aware of. 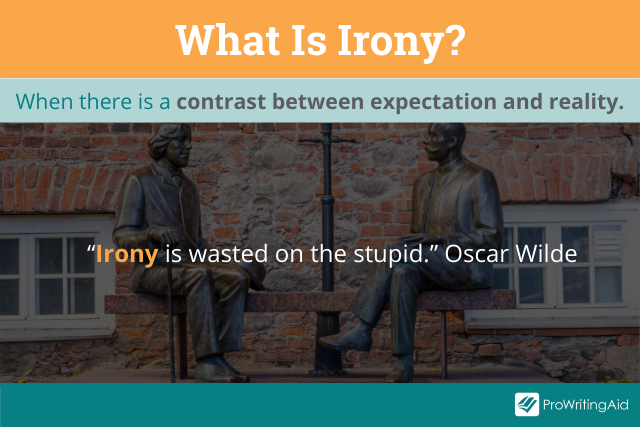 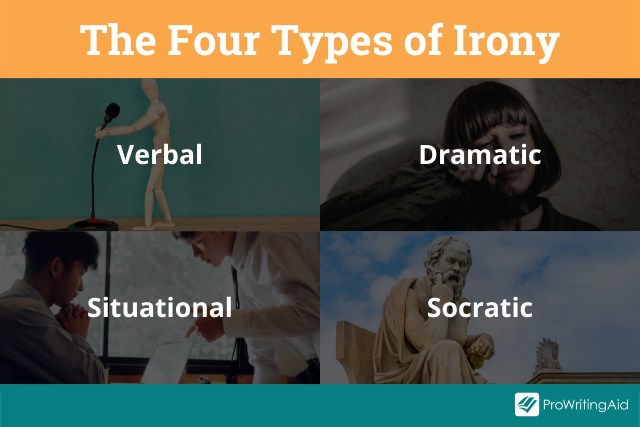 Why is irony important to understand? Along with being a key rhetorical device, irony can also be very effective when used correctly in writing.

To demonstrate this fact we have selected ten examples of irony usage from popular literature. Warning: this list includes a few spoilers.

1) The main characters’ wishes in L. Frank Baum’s The Wonderful Wizard of Oz are a perfect example of situational iron.

The characters go on a quest to fulfill their hearts’ desires and instead of doing so they realize that they already had what they wanted all along. It is unexpected because the reader might assume that all of their desires will be gifted to the four main characters but, at the end, it’s unnecessary.

2) The conclusion between the two primary opponents in The Night Circus contains a large amount of situational iron.

The reader is led to expect that either Marco or Celia will win but, at the end, they both end up working together to keep their creation alive. The competition is not as black and white (pardon the pun) as it initially seems.

3) The Strange Case of Dr Jekyll and Mr Hyde is full of verbal irony. A great example of this is when Dr Jekyll says “I am quite sure of him,” when referring to Mr Hyde.

This is verbal irony because the reader finds out that Hyde is actually Jekyll’s alter ego, so it would be expected that he knows himself well.

4) Shakespeare creates dramatic iron in the prologue of Romeo and Juliet through the line: “A pair of star-cross’d lovers take their life.”

This well-known example is ironic because the reader knows from the very beginning that their romance will end in death, but they don’t yet know how. 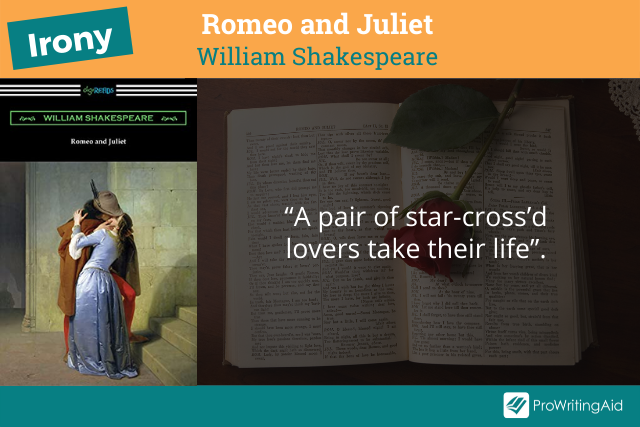 5) Alice’s changing relationship with the Bandersnatch in Alice in Wonderland is situationally ironic.

When we first meet the Bandersnatch, he is ferocious and attempts to harm Alice. When Alice returns his eye, they become friends and the two work together to defeat the Jabberwocky. The audience expects to see an enemy but are instead presented with an ally.

All of the animals work together to escape the tyranny of the humans who own them. In doing so they end up under the even stricter rule of the pigs.

7) Roald Dahl’s short story A Lamb to a Slaughter is full of dramatic iron.

A housewife kills her husband with a frozen leg of lamb when he asks for a divorce. The police come looking for evidence and unknowingly dispose of it when they are fed the murder weapon for dinner.

8) The repeated line “May the odds be ever in your favor” in Suzanne Collins’ The Hunger Games is verbally ironic.

Everyone from district 1 through 12 can be offered as a child sacrifice and has a 1/24 chance of surviving. Even if they do survive they are then delivered back under the control of the Capitol, so the odds are in nobody’s favor.

9) The disparity between children and adults in Roald Dahl’s Matilda is situationally ironic.

Most of the adults in Matilda’s life are hot-headed, uneducated, and unreasonable, while she as a six-year old is more mature than most of them. The traditional roles of child and adult are unexpectedly flipped on their heads.

10) The hit-and-run in F. Scott Fitzgerald’s The Great Gatsby is situationally ironic.

Daisy Buchanan kills Myrtle when Myrtle runs in front of Gatsby’s car. It is ironic because Myrtle is Tom Buchanan’s mistress but Daisy does not know this. She unintentionally killed her husband’s mistress.

Irony works so well in literature because it is so common in real life. Have you ever found yourself saying “well that’s ironic” to a situation in your life?

You could be talking about verbal, situational, or dramatic irony. Let’s take a look at a few everyday examples of each type.

11) When you find out that your pulmonologist (lung doctor) smokes.

This is situationally ironic because you’d expect this doctor of all people to avoid smoking because they understand all of the risks.

12) When someone falls over for the tenth time while ice-skating and says “I meant to do that.”

This person cannot be intending to fall over all the time but they are using verbal irony to make light of a possibly painful situation.

13) Your dog eats his certificate of dog-training obedience.

You would expect that in the process of having obtained an obedience certificate, the dog would also have learned not to eat random objects. This is an example of situational iron.

This is situationally ironic because the last thing that you would expect to be on fire is the object that is designed to fight fires. A similar example to this would be if a fire station were on fire.

15) A girl is teasing her friend for having mud on his face but she doesn’t know that she also has mud on her face.

From the point of view of the friend, this is an example of dramatic iron because he knows something that she does not.

16) Your mom buys a non-stick pan but has to throw it away because the label is so sticky she cannot get it off.

You would predict that the pan was completely non-stick but are proven wrong at the first hurdle, which is situationally ironic.

17) When someone crashes into a “thank you for driving carefully” sign.

The vision of a car crashed into the sign makes it clear that they did not drive carefully at all, which is situationally ironic.

18) Buying your English teacher a mug that reads “your the best teacher ever.”

The poor English teacher may feel like they have failed in their job in this situationally ironic situation where their student has bought them a mug with a grammar mistake.

19) When a child says “I want crisps now!” and the parent says: “Thank you so much for using your good manners.”

The child is being impolite and the parent is not actually congratulating the child on their manners in this example of verbal irony. They mean the exact opposite.

20) You can’t open your new scissors because you don’t have any scissors to cut through the plastic.

This example of situational iron is far too common. In buying scissors, it can be expected that you do not have any, so it is ironic that the packaging is designed for someone who already has a pair.

Which Scenario Is an Example of Irony?

Are you ready for a quick quiz to test your knowledge of irony? The test is split into the three types of irony.

Which of These Are Examples of Situational Irony? 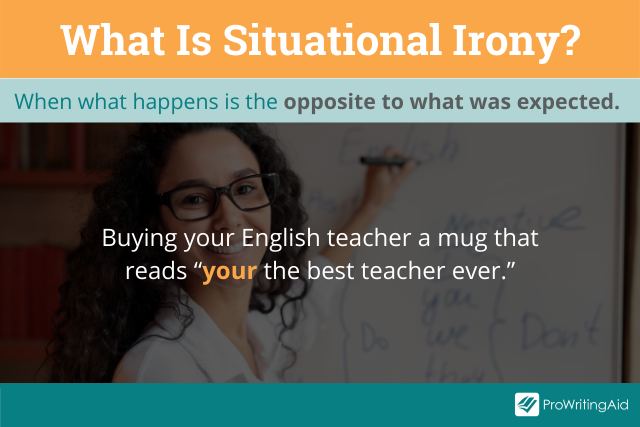 1) A police station is robbed.

2) A child loses his rucksack after being told to take care not to lose it.

3) A person eats sweets while preaching about healthy eating

Only 1) and 3) are examples of situational irony. Sentence 2) is not a situational irony example because it could be expected that the child might lose the rucksack and that is why they were told to take care.

It would, however, be ironic if he lost his “Most Organized in 2nd Grade” certificate five minutes after being awarded it.

Which of These Are Examples of Verbal Irony? 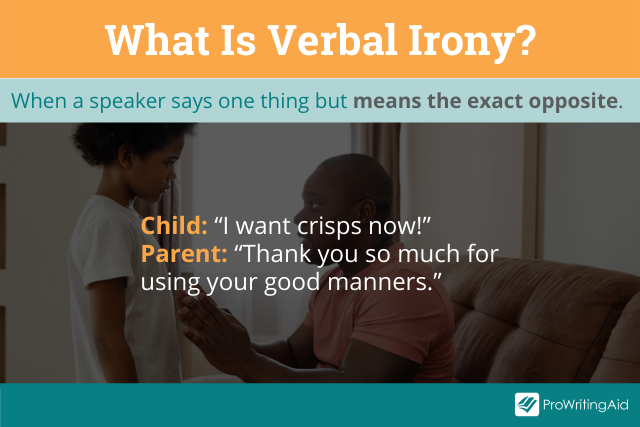 1) Saying “The weather is lovely today” while it is hailing.

3) Saying “Thank you so much for your help” after someone has crushed your new glasses while helping to look for them.

Only example 1) is verbally ironic, the other two are sarcastic comments.

Verbal irony and sarcasm are often confused but there is one big difference between them: verbal irony is when what you say is the opposite of what you mean while sarcasm is specifically meant to embarrass or insult someone.

Which of These Are Examples of Dramatic Irony? 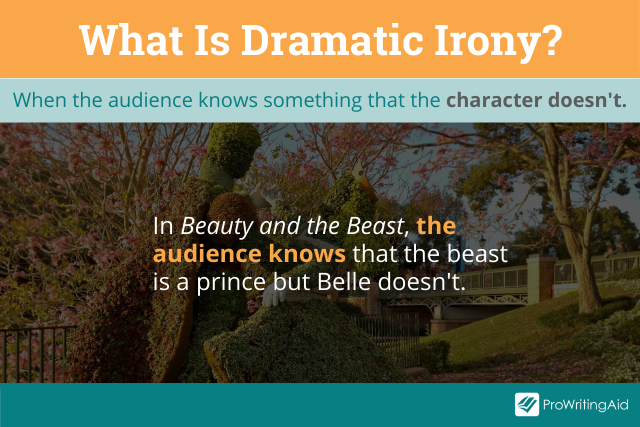 1) A small ship without life boats is stuck in a monumental storm in the middle of the Atlantic.

2) Three characters are killed and a fourth seems to be going the same way.

3) A girl walks down the same alley we have just seen a known murderer walk down.

Only option 3) is an example of dramatic irony because the audience knows that the murderer is down the alley but the girl does not.

Although the other two examples are undeniably dramatic, there is no inherent irony because the audience has no more knowledge about what will happen than those involved.

Why Should You Use Irony in Your Writing?

Irony can be an effective tool to make a reader stop and think about what has just happened.

It can also emphasize a central theme or idea by adding an unexpected twist to the events of the story.

What brilliant examples of irony in literature have we missed? Share your favorites in the comments.