Meta has released its latest state of Small Business report, which measures the impacts of the pandemic on SMBs around the world, and highlights how minority-owned businesses, in particular, are bearing the brunt of the effects.

Meta’s State of Small Business Report series is based on an ongoing survey of almost 24k business leaders across 30 countries and territories, including 5,324 business leaders from the US. That scale provides an indicative snapshot of the current market – and while some impacts have reduced over time, it’s clear from this latest update that COVID is still causing major ripples throughout the sector.

First off, on closure rates – Meta says that despite vaccine take-up increasing, and lockdowns and closures reducing, 20% of SMBs reported that they were not operational or engaging in any revenue-generating activities in January, up from 18% in July 2021.

And as you can see from this chart, closure rates have increased in the majority of US states.

Of those that have remained open, 30% reported that sales in January 2022 were higher than the same period a year ago, while 36% of US SMBs reported a rise in sales.

That means that the majority of businesses are still seeing average or below results, despite more people being able to get out of the house and go shopping. Various restrictions remain in place, so it’s not entirely open as yet, but it’s clear that we still have a way to go in regaining momentum in the post-COVID landscape. If we’re even at that stage.

With that in mind, it’s little surprise to also see that 81% of SMBs indicated they had used digital tools in the past 30 days. 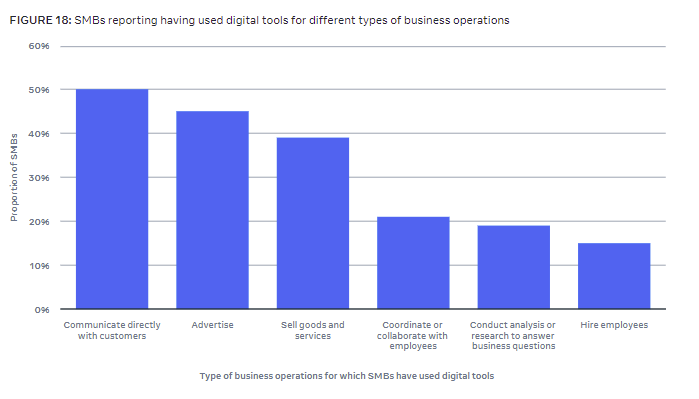 As you can see in this chart, 50% of SMBs globally reported that they have been using digital tools to communicate directly with customers, the most prevalent use of digital tools, while 38% of SMBs in North America indicated that the majority of their sales were made digitally. 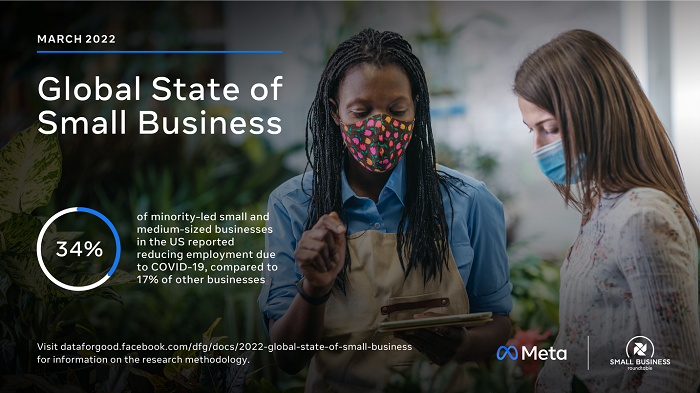 Disparity like this is part of the reason why social platforms continue to push initiatives that promote these businesses specifically, as a means to address ongoing effects, and reduce the impacts of racial and gender disparity, where possible.

Which is not always possible, and it’s important to recognize these impacts in the broader scope of the pandemic, and to consider those affected within your own communities as a result of the ongoing changes.

It does feel, in many ways, like we are getting back to a level of normal, but the full impacts of the pandemic are likely to be present for years yet. And within that, we need to do all that we can work with local businesses, while also adjusting to new norms and facilitating growth, whether through updated recruitment processes, new shopping behaviors, etc.

Meta’s full, 71-page State of Small Business report includes a range of in-depth insights and notes on the ongoing impacts of the pandemic, and given that SMBs are the engine that fuels the overall economy, it is worth taking a look, and getting an understanding of where we’re at, and considering what that could mean for your future efforts.