There’s a lot of confusion around the difference between paid and payedsince they’re both pronounced the same way.

The good news is that unless you spend a lot of time on a boat, you actually don’t have to worry about payed. Just go with paid.

In this article, we’ll help you remember the difference between paid and payedand show examples of each word in context.

Paid vs Payed: What’s the Difference?

Let’s start with a basic definition of each of these words: 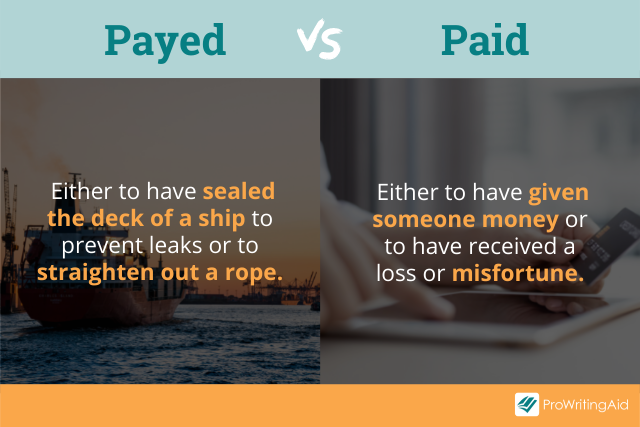 TIP: To remember the difference, think of a sailor’s favorite word: Ay, as in “Aye, aye, captain!” Thus, sailors like to say payedwhile everyone else says paid. 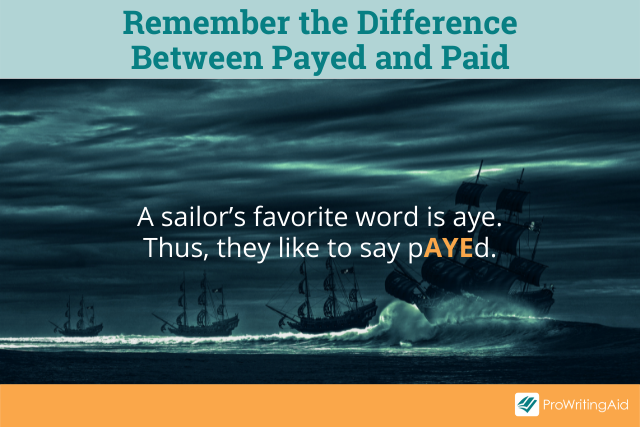 The Past Tense Form of the Verb “Pay”

Anytime you’re talking about having given someone money or some other form of barter, you should change the verb pay to paid to switch from present tense to past tense. 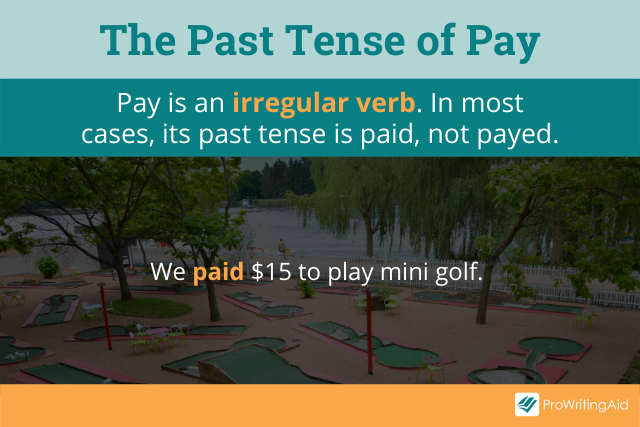 The verb pay is irregular, which means that its past tense is a special case.

You can’t just add “-ed” at the end to change it to past tense, the way you do with regular verbs such as “jump” (“jumped”), “paint” (“painted”), or “stay” ” (“stayed”). Instead, you have to use a special spelling for the correct past tense form—paid.

Is Payed Actually a Word?

The word payed is a real word, but it’s much rarer than paid. In fact, you should only use this spelling if you’re talking about boats or ropes.

The first seafaring definition of payed When you seal the deck of a wooden ship in an attempt to avoid leaks occurs.

For example, you would write “The sailor payed the deck to make it seaworthy.”

Basically, if you can say “the deck” after it, then you may be able to use payed.

Another time you might be able to use the term payed is if you are talking about rope.

This is also used mostly on ships. You’ve probably seen a rope being slowly straightened before. If so, then you know what this is referring to.

That process is called paying the rope, and in its past-tense form, it becomes payed.

For example, you would write “She payed out the rope to raise the sail.”

In this case, if you can say “out the rope” after it, then you may be able to use the word payed. 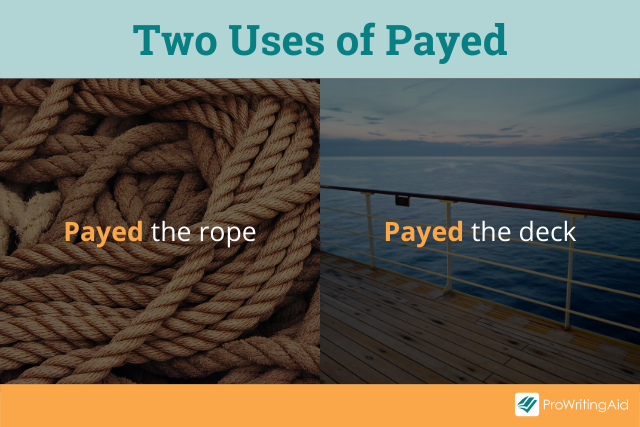 Examples of Payed vs. Paid in Sentences

Let’s look at some examples of payed and paid in a sentence.

Examples of “Payed” in the Nautical Sense

Remember that you should only use payed if you’re talking about ships or ropes.

Here are some examples of payed in a sentence:

Examples of “Paid” as in Payment

One of the most common definitions of pay is to give money or other forms of barter. With this definition, you use the irregular verb, paid.

Here are some examples of paid as in payment:

Examples of “Paid” as in Revenge or Misfortune

Another way you might use the irregular verb of pay is when you are talking about making someone pay for their actions. In this case, you should also use paid.

Here are some examples of paid as in revenge or misfortune:

A common question people ask is this: “Is it paid attention or payed attention?”

In this case, you are still talking about a form of payment. However, instead of money, you are paying with attention.

Here are some examples of paid as in “pay attention”:

You can use ProWritingAid’s grammar checker to check if you’re using any of these phrases incorrectly. With a quick check, you can ensure that your writing is clean and error-free.

Is It Paid Off or Payed Off?

Another common question is: “Do you get paid off or payed off?”

Once again, the answer is simple. Always go with paid when you aren’t using nautical terms.

Here are some examples of paid as in “pay off”:

Examples of “Paid” as an Adjective

Let’s look at some examples where you pay isn’t a verb at all, but an adjective.

Here are some examples of paid as an adjective:

In general, payed vs. paid isn’t that complicated. Away from the sea, just go with paid and you are likely good.

What are your favorite tips for remembering the difference between “paid” and “paid”? Let us know in the comments.