Many writers misspell numbers, even native speakers of English. A common mix-up is ninty and ninety.

So how do you remember how to spell 90?

The correct spelling is ninety with an E.

In this article, we’ll go into more detail about the correct spelling and show you examples of how to use ninety in a sentence.

Let’s start with a basic definition of 90: it’s a number between 89 and 91, equivalent to nine times ten.

It’s an important number in many fields. In geometry, for example, right angles have ninety degrees. It’s also commonly used in percentages; many books and articles include phrases like 99%.

What’s the difference between Ninty and Ninety?

Ninty is not a real word. You should always use ninety.

If you’re struggling to remember how to spell 90, one helpful tip is to start by writing out nine and then adding the rest of the word. 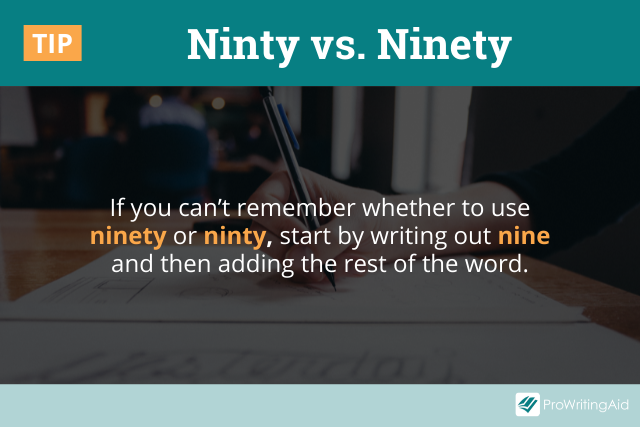 You can also use a grammar checker like ProWritingAid to make sure you’re spelling tricky numbers correctly.

Try the grammar check with a free ProWritingAid account.

Most style guides recommend that you use numerals for any number greater than ten. For example, you would write out the words nine and zerobut you would represent ninety as 90. 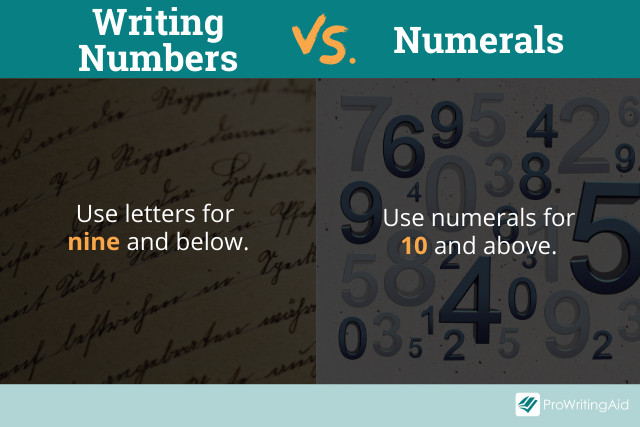 In some cases, however, it makes more sense to spell out the entire word than to write the numerals.

Whenever a sentence begins with the number, you need to use the correct spelling instead of using the numerals.

In contrast, it’s okay to write “The conference was attended by 90 people,” because the 90 doesn’t occur at the beginning of the sentence.

You might also make the stylistic choice to spell out the word ninety.

For example, if you’re writing poetry or a line of dialogue, you might want the reader to sound out the word, in which case spelling out the word might make more sense.

Examples of the Word Ninety Used in Sentences

Let’s look at some examples of ninety used in popular English books.

“I am ninety. Or ninety-three. One or the other.”—Water for Elephants by Sara Gruen

“Ninety percent of the time the very sight of you makes me want to commit murder.”—The King’s Men by Nora Sakavic

“The mistake ninety-nine percent of humanity made, as far as Fats could see, was being ashamed of what they were, lying about it, trying to be somebody else. Honesty was Fats’ currency, his weapon and defense. It frightened people when you were honest; it shocked them.”—The Casual Vacancy by J.K. Rowling

“I was ninety-nine point nine percent sure that I was dreaming.”—New Moon by Stephenie Meyer 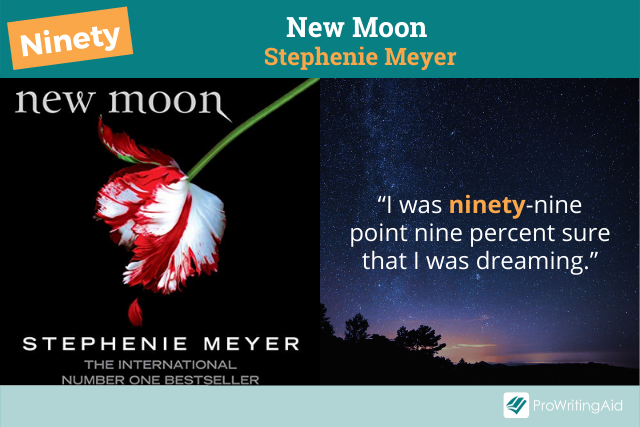 “Your man may be floundering in a swamp, and by all means throw him a rope if he is… but there’s no need to knock him unconscious with ninety feet of steel cable.”—On Writing by Stephen King

“That’s the thing about almost: you can be ninety-nine percent there, you can be an inch away from doing it, but if you stop yourself from stepping over that line, nobody will ever know how close you were.”—The Road Trip by Beth O’Leary

“I was four. New and somewhat interesting applied to about ninety percent of my day, in everything from the development of a scab, to a cartoon I’d never seen, to an unexpected flavor of juice at lunch. It’s difficult to assign value to a discovery when you haven’t sorted out the parameters of reality yet.”—To Be Taught, If Fortunate by Becky Chambers

“Ninety-nine times out of a hundred, people don’t criticize themselves for anything, no matter how wrong it may be.”—How to Win Friends and Influence People by Dale Carnegie

Now you know how to spell the number ninety. And if you spell it wrong, don’t worry—it’s an understandable mistake to make. After all, we spell 40 forty instead of fourtyand 50 fifty instead of fivety. Remembering how to spell numbers in the English language isn’t always easy!